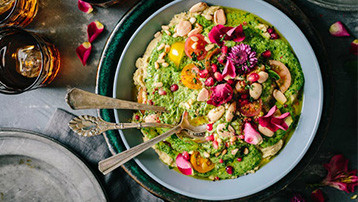 Cannabis can be used for many medical reasons, but one of the most well known benefits of marijuana is its ability to stimulate appetite. This effect can be a great help to patients who have trouble eating due to the interaction of medications or other factors. Some patients even claim that marijuana makes food taste better. A study on mice attributed this sensation to the fact that cannabinoids in marijuana increase the body’s sense of smell, which is linked to our sense of taste.

Read on to learn about several delicious and healthy food options that can actually increase marijuana’s effects on the body to amplify their medicinal benefits!

Marijuana includes many natural terpenes, which help the cannabinoids in marijuana interact with the body’s endocannabinoid system.

Myrcene is the single most abundant terpene found in cannabis. The myrcene terpene is also found in mangoes, and with considerable concentration. When you eat a mango before ingesting marijuana products, the body will have a higher level of myrcene. Once THC and other cannabinoids enter the body, myrcene will help facilitate the interaction between these cannabinoids and the body’s cannabinoid receptors.

As a result, the effects of marijuana will set in faster, become stronger and last longer.

Natural cannabinoids in marijuana are responsible for producing the euphoric effects felt by the body. Chocolate actually includes a type of cannabinoid of its own, known as anandamide. This cannabinoid is also naturally produced in the body, and is believed to be the reason that you experience the euphoric sensation known as a “runner’s high” after exercise.

(Anandamide has even been shown to inhibit the multiplication of breast cancer cells!)

When consumed with cannabis, chocolate can enhance the euphoric effects and pain relief of marijuana thanks to its anandamide levels.

Black and green teas are packed with antioxidants, which already support significant health benefits. One antioxidant in particular, called catechin, is known to provide anti-inflammatory and neuroprotective benefits by interacting with the body’s cannabinoid receptors.

The benefits of catechin and other antioxidants in tea can be combined with marijuana to eliminate stress and produce a stronger sense of peacefulness and relaxation.

Broccoli contains high amounts of beta-caryophyllene, a natural cannabinoid that interacts with cannabinoid receptors to reduce pain and inflammation. These are two incredibly common reasons that patients use medical marijuana.

By preceding your marijuana use with a healthy amount of broccoli, you can enjoy even more significant pain relief!

OTHER NATURAL TERPENES AND CANNABINOIDS

Like those in the foods listed above, there are many naturally-occurring terpenes and cannabinoids that can enhance the effects of marijuana to help you get the most out of your cannabis use. There are several plants and herbs (such as thyme, sage, and bay) that are known to include terpenes like linalool, limonene, and alpha-pinene, which can all magnify marijuana’s effects and provide health benefits of their own.

On the other hand, becoming “too high” or anxious because of marijuana use may also be a concern. In these cases, the terpenes found in black pepper can help reduce anxious feelings and calm you down.

WHERE CAN I LEARN MORE ABOUT MEDICAL MARIJUANA?

At CannaMD, we make it our priority to help patients stay up-to-date on the latest studies and regulations relating to medical marijuana. We’re happy to provide you with the resources and professional advice you need to navigate the ever-changing landscape of medical marijuana treatment!

If you are interested in determining if you qualify for treatment, please call us today at 561.631.7994 or fill out our free online application!